Our designer in focus today is Paul Kafkea. Paul Kafka was born in Vienna, 1907 into a family of Furniture design and cabinet making. From a young age, he helped in his father’s workshop making practical pieces of furniture and then moving onto an apprenticeship with another Viennese furniture workshop.

He began his professional career in the early 1930s designing furniture for a showroom in Vienna as well as a consultant in interior design where he learned fundamental aspects of furniture making and design.  Experience in his father’s factory and an apprenticeship in another Viennese furniture factory gave him a good grounding in the more practical aspects of furniture making, but he is also said to have studied furniture and interior design at the University of Applied Arts in Vienna 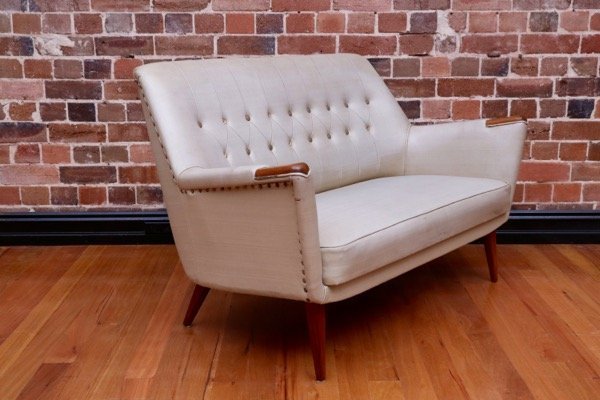 One of Kafka’s most noted designs, the “Loveseat”.

In the late 1930s, he emigrated to Australia with his wife. Shortly after, in 1941 he began a small furniture manufacturing business in Darlinghurst where he carried out boutique custom designs, servicing many clients from the Eastern Suburbs of Sydney. He carried into the 1950s designing furniture and fit-outs for not only residential clients, but for commercial clients as well, such as The Sheraton Hotel.

From humble beginnings, Kafka moved to larger premises in Waterloo and by the late 50s had employed up to 40 staff members. He manufactured and designed to order, furniture for many Australian-European architects such as Harry Seidler, Hugh Burich and Henry Epstein.

In 1948 he designed and produced the built-in cabinetry and furniture for the renown ‘Rose Seidler House’ by Harry Seidler and was a regular collaborator with Seidler on many other projects.

Kafka continued to design fit-outs and furniture moving onto larger corporate projects throughout the 1950s and in recent years, Paul Kafka’s work has been recognised as some of the most creative, forward-thinking and aesthetically beautiful designs of its time, being featured in the Sydney Power House Museum.

He executed commissioned work for Australian modernist architects such as Hugo Stossel, Hugh Buhrich, Harry Seidler and Harry Epstein. He also carried out contract work for Sheraton, the Chevron Hotel and for the Travelodge motel chain

About the Author: Marco